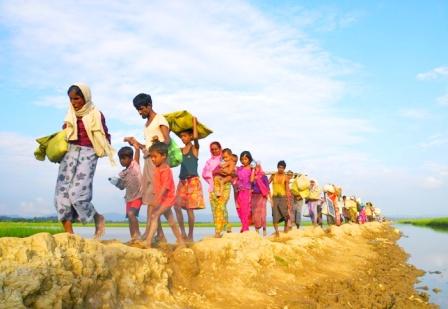 Is it not time once again, Ms. Suu Kyi, to sing the tunes of Myanmar’s democratic spirit?

As a teenager, I was too young to understand the complex nuances of democracy. Nevertheless I was in awe of a woman who took the world by storm for her fierce independence of thought and her staunch belief in freedom.

Today, I am deeply pained to see that the image of that icon for egalitarianism as blurred. I speak of you, the State Councillor of Myanmar, a country that was thought to be bearing the real fruits of independence after decades of struggle.

Ms. Suu Kyi, have you forgotten what you once wrote (I shall refer to your collection of writings Freedom from Fear often in this letter) of your father? You wrote that the noble Aung San was:

“Never hesitant to speak the truth, painful or otherwise… (he) in his public speech on 13 July 1947 exhorted the Burmese people…urging them to ….remember it would take years of toil before the benefits of independence could be savoured to the full.”

He also said in that speech, which you recalled, that they (Burmese people) must mend their ways. You wrote with pride that he “was one who was conscious of the need to remedy his own shortcomings… what had been tolerated in a young student revolutionary would not be seemly in the leading statesman of the nation; there were rough edges to be smoothened…”

Verily, these declarations stand true for any era of leadership. You had once written of a part of your nation, Arakan [Rakhine], describing it as having the greatest attractions in the form of its beautiful beaches. Today, these same beaches are witnessing a community being persecuted simply because the community’s culture is different.

Ms. Suu Kyi, have you forgotten how you described certain leaders who “claim for themselves the official and sole right what does or does not conform to indigenous cultural norms”? Pray, how can this be different from a scenario where religious tolerance should receive equal weight as the principles of democracy? Rohingya are suffering due to internal displacement, forced migration and refugee status.

Ms. Suu Kyi, have you forgotten that you once passionately wrote about the refugee: “The Burmese expression for refugee is ‘dukkha-the’, ‘one who has to bear dukkha, suffering’. In that sense none of us can avoid knowing what it is to be a refugee”? I beseech you to relive these very words from today.

Ms. Suu Kyi, have you forgotten your writing that “The Mons and the Burmese, who were sworn enemies throughout much of their history, have learnt to live together in peace. With the development of mutual understanding and tolerance, the other peoples could also learn to live in harmony”? I ask of you to not say that the Rohingya are not even people of Myanmar to begin with.

Have you forgotten, Ms. Suu Kyi, you admitted in your writings about the Burmese intelligentsia having “a reluctance to examine the past with objectivity”. Is it not time for your esteemed intellect to view the crisis today through a new lens, one without the murkiness of historical ambiguity.

Please remember your words: “It is the histories and civilizations of the peoples of Burma which have built up the character of the nation.” Indeed, history has shown that the Rohingya have as much right to be threads of Myanmar’s socio-political fabric as the nation’s other ethnic groups. The Rohingya once served the country as civil servants, military officers and other noble professionals. They have toiled in the rice fields alongside the Rakhine people for ages.

Have you forgotten Ms. Suu Kyi, the ‘democracy songs’ you quoted in your written work?

“I am not among the rice eating robots… Everyone but everyone should be entitled to human rights.”

“We are not savage beasts of the jungle, we are all men of reason, it’s time to stop the rule of armed intimidation: if every movement of dissent were settled by the gun, Burma would only be emptied of people.”

Is it not time once again, Ms. Suu Kyi, to sing the tunes of Myanmar’s democratic spirit?

Ms. Suu Kyi, is it not the right moment to recall the pearls you have penned down: “(The quest for democracy in Burma) is part of the unceasing human endeavour to prove that the spirit of man can transcend the flaws of his own natur.”?

You have stated in an interview, “Fear, like so many things, is a habit. If you live with fear for a long time, you become fearful. This is why I think when people say I’m so brave, perhaps it’s just that I’m not used to being frightened.”

Ms. Suu Kyi, have you forgotten that your own ‘freedom from fear’ does not justify indifference to the fears of the Rohingya for their lives?

Ms. Suu Kyi, have you truly kept silent because of these very words which you had voiced? “They (Myanmarese people) will support me as long they are confident that I have their interests at heart, and if they lose that confidence, they won’t support me anymore. It’s very simple…” Ms. Suu Kyi, this simplicity of political equations is adding up to be a life-and-death sum for the Rohingya.

I urge you to speak out for their rights, including their parliamentary ones. Ms. Suu Kyi, you have been recorded as mentioning that “’Parliament’ comes from the (French) word ‘talk’… You talk about your problems… your differences. It is better to shout at each other than to kill each other.”

Ms. Suu Kyi, please remember that there is possibility of ethno-resource conflict underlining the Rakhine state crisis. Until both the root causes — ethnicity and economic dimensions — are addressed, the chances of resolution are dim.

Ms. Suu Kyi, I entreat you to not forget that the dim prospects for livelihood would have made Rohingya seek the less-trodden path of education for their children. But here too, the next generation faces lofty barricades. There are reports of UNHCR finding it difficult to keep displaced children motivated. They fear them turning to radicalism. Ms. Suu Kyi, please remember these words, and understand that you and your brethren must pull out, one by one, the spokes of the wheel of the conflict.

I end this letter by adapting the lines of an 18th century courtier-poet, Let-We Thondara, whom you have once fondly quoted:

Do not fear that without the strength of the people

Namely, the majority of Myanmarese who

bear a stance against the Rohingya,

That the sword of democracy

The spear of freedom

Asma Masood is an India-based researcher on international relations. She is a Research Officer with the Chennai Centre for China Studies (C3S) based in India.