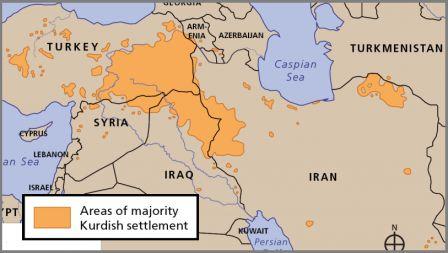 The Damascus negotiations [between Assad and Kurds] are more realistically an attempt to test the waters and we should not have any high hopes from these initial talks. The negotiations will be long and arduous process, as the Assad regime is very centralized.

Syria’s Kurds are trying to negotiate a settlement with [the Syrian regime headed by Bashar al-Assad], as they seek to protect gains made in seven years of war. Wary of their unpredictable partner, the Kurds are now eager to negotiate with the regime.

Initial round of talks has already taken place when a delegation led by Ilham Ahmed, the executive head of Syrian Democratic Council (SDC) which is a political arm of Kurdish dominated SDF, visited Syrian capital Damascus last month.

This marks the first diplomatic engagement between the Assad regime and the Kurds since 2011. The Damascus negotiations are more realistically an attempt to test the waters and we should not have any high hopes from these initial talks. The negotiations will be long and arduous process, as the Assad regime is very centralized.

But there are speculations that in the meeting, both the SDC and the Assad regime representatives agreed that it is not possible to carry on with the current administrative system of the country and that a decentralized state structure is a necessity. But, deciding the exact form of a decentralized state structure will be a long negotiation process. In a meantime, until a final agreement is reached, goodwill and confidence building measures should be taken by both sides so that the talks can progress in positive environment. The handover of the Tabqa Dam to the Assad regime by the Kurds was a good example to this end.

Now the Syrian conflict is entering into its final stages, as not many enclaves are left outside the regime control. [The regime’s head] Bashar Al-Assad has already stated that if the Kurds-controlled areas are not returned to his regime’s control through negotiations, he will not hesitate to use force.

Moreover, the US has announced its desire to withdraw from Syria — something that could leave the SDF exposed to its enemies, who might consequently be emboldened. In an attempt to avert such an outcome and secure its gains on the ground, the political arm of SDF, the SDC, appears to be in a hurry to reach an agreement with the regime when its negotiating power is still strong. For the regime too its desirable that it restores its authority over the SDF-controlled areas without any major military campaign and it saves its military resources for Idlib, the last major rebel stronghold.

The SDC negotiators appear to be hoping for a devolution agreement along the lines of a 2011 decree issued by the regime detailing the role of the local authorities. The Decree 107, also known as the “Local Administration Law,” was introduced as part of a package of political reforms passed in August 2011 in response to the demands made by a civil uprising, which was already sweeping the country. The decree was designed to devolve political and administrative responsibilities to the institutions at the local level, though it was never fully clear how it would be implemented.

Prior to the start of the ongoing Syrian civil war, the two million Kurds in Syria – accounting for approximately 15% of the total population – has only aspired to nothing more than a degree of autonomy — something that has been always denied to them. It was even acknowledge by state that the Syrian Kurds never thought to break away from the country.

Last September, the regime’s foreign minister Walid Muallem said that his regime was open to the idea of greater powers for the country’s Kurds. He said “They want a form of autonomy within the framework of the borders of the state, this is negotiable and can be the subject of dialogue.” The SDC delegation’s recent visit to Damascus may be the start of this process.

With a shared enemy (i.e. Turkey) and the perceived advantages from cooperation, the outcome of the current negotiations could well be Assad’s continuation in power, sustained by Kurdish support. The Kurdish forces needs help from the regime’s army to protect the Kurds from Turkey’s military, and the regime’s army too needs help from the Kurds for ruling the northern Syria and policing against both rebel and ISIS attack. Hence, it’s a mutual benefit for both the parties to cooperate with each other.

Syria now suffers from deep divisions along both ethno-sectarian and geographic lines, courtesy the seven years of conflict. While economic links and interdependency still very much persists among the various parts of the country and most of the Syrians remain remarkably attached to the idea of national unity, the country is fragmenting into competing centers of power — something that clearly suggests that Syria can’t anymore be a monolithic nation state. But weather it going to be a decentralized state – a federalism or a confederation – that has to be decided by the Syrians themselves.

Syria is a multi-ethnic society consisting of Sunni Arabs, Assyrians, Armenians, Turkomans, Alwaites and Yazidis. keeping the country united and stable requires decentralization by way of delegating the powers at the local level. In multi-ethnic countries like Nigeria and India, this kind of model has arguably helped to hold these countries together. Future Syrian state should be the country that accommodates and grants the rights of all the ethnic groups and where everyone feels they are participating in running the state.

Manish Rai is a columnist for Middle East and Af-Pak region and Editor of geopolitical news agency Viewsaround.